Considered as one of the greatest architect of all time; Sinan was the Chief Architect of the Ottoman Empire. His genius was multifaceted; which combined a profound knowledge of engineering, a deep understanding of volume and symmetry, the management of water, the use of light and great mastery in creating some of the most beautiful features of the cityscape in major cities of the Ottoman empire such as; the Suleymaniye Mosque, Selimiye Mosque and Drina Bridge. His works are extant in a vast geographical area including Turkey, Israel, Egypt, Greece, Ukraine, Hungary, Saudi Arabi, Iraq and Syria.

Discover Sinan the Architect, in this two-part app series. Featuring an epic documentary film “Mimar Sinan the Architect” which will appear for the first time on the iPad. Scroll through this beautifully crafted app and read about Sinan’s life, his art and work. Read and explore the Suleymaniye Mosque with an interactive 3d model.

・The first chapter of “Mimar Sinan the Architect: From Agirnas to Istanbul” documentary film.

・Explore the original miniature arts from the 16th Century in never before seen depth; as you scroll through this beautifully crafted app.

・Study and explore the Suleymaniye Mosque’s interior and exterior with a 360° Interactive 3d model.

・Photographs from the original “Mimar Sinan the Architect: Exhibition and Photo Album”.

・Read about the life, the art and works of the master builder. Discover the genius of Sinan the Architect and learn why many compare him to geniuses like Da Vinci and Michelangelo; while reading about the secrets of Suleymaniye Mosque.

After more than two years of intensive work, the Mimar Sinan Documentary and Photography Exhibition Project, which is a complete anthology of this master architect’s works that expand over a vast geographical area including Israel, Saudi Arabia, Syria and Iraq as well as Greece, Macedonia, Bosnia-Herzegovina, Bulgaria, Romania, Hungary and Ukraine, is now complete.
The soundtrack of our 6-part documentary series was composed by renowned musician Fahir Atakoglu, while the costumes were designed by famous fashion designer Faruk Sarac. Sinan was played by celebrated actor Kenan Isik. The result is a high-quality, four and a half hour documentary.

“Sinan is the Michelangelo of the East” – La Repubblica 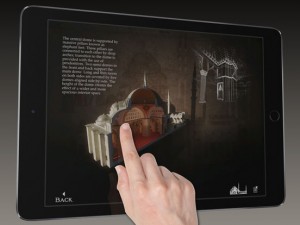 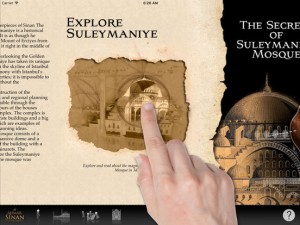 This is my second app about Mimar Sinan the Chief Architect of the Ottoman Empire. I completed it in 2013 but took it down because we had a similar project coming up which was "The Sinan Atlas" and we were thinking about selling the app but anyway, I've re-done the code so its compatible with iOS 8.0 and up.